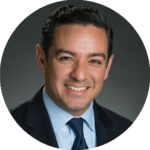 Prior to joining Mosaic,  Blanco started his career as a Military Intelligence Analyst in the U.S. Navy.

Thereafter, Blanco managed the campaign of Congressman Ciro Rodriguez (TX-23) and served the Congressman in a variety of capacities, including Chief of Staff and District Director. He is a former Chief of Staff to Congresswoman Sheila Jackson Lee (TX-18) and Congressman Pete Gallego (TX-23), and was a Caseworker and Field Representative for Congressman Silvestre Reyes (TX-16).

In addition, Blanco was the Vice President of Development and Strategic Partnerships with the Latino Center for Leadership Development. Blanco served as Interim Director and Political Director for the Latino Victory Project in an election cycle that saw historic gains for Latinos in the US Congress.

Blanco also worked as the Arizona State Director for Obama for America for the 2012 Presidential Election and was the Western Region Political Director for the Democratic National Committee (DNC) – serving as the Democratic Party’s principal liaison and political advisor for the West while working with 13 state parties and coordinating with the White House, Cabinet members, and the DNC Chair and Vice Chairs.

Blanco chaired the Texas House Democratic Campaign Committee from 2017 until September of 2019, including when Democrats picked up a historic 12 seats in 2018. He was recently elected to Democratic National Committee by the Hispanic Caucus of the Texas Democratic Party. Blanco served three terms as a State Representative for Texas House District 76 in El Paso, Texas.

In 2020 he was elected to represent El Paso, Hudspeth, Culberson, Jeff Davis and Presidio counties in the Texas Senate.